The History of the Sloatsburg Estate 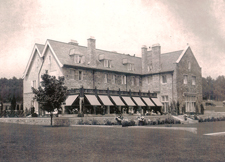 The property and buildings of the SSMI in Sloatsburg were formerly part of an estate called Table Rock which had been built for William Pierson Hamilton (1869-1950) and his wife, Juliet Pierpont Morgan (1870-1952). Juliet was the daughter of the great financier, J. Pierpont Morgan (1837-1913). William was the great-grandson of Alexander Hamilton (1757-1804), the US statesman and first Secretary of the Treasury.

Alexander Hamilton’s son, John Church Hamilton, was the father of William Gaston Hamilton. William married Helen Mirah Pierson, daughter of Henry Lewis Pierson, key financier of the Erie Railroad. It was to William and Helen that William Pierson Hamilton was born. William grew to maturity on the 10,000 acre Pierson “Homestead” near Suffern, NY. On April 12, 1894, William took Juliet Morgan to be his wife. Five children were born of this union: Helen Morgan, Pierpont Morgan (1898-1982, WWII Congressional Medal of Honor recipient and General in the US Army), Laurens Morgan, Alexander, and Elizabeth Schuyler. 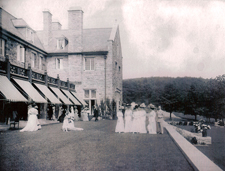 Having been raised in the Sloatsburg area, William Hamilton decided to build an estate of his own in Eagle Valley (the address was Tuxedo then) — within several miles of his boyhood home. A literal village of Italian masons was imported to construct the grand estate and descendents of these masons still live the Tuxedo area. Construction of the 2,000 acre Table Rock Estate began around 1900 and the cornerstone was laid in 1904. All the stone was quarried on the property. Until the completion of Table Rock House, the Hamilton’s resided in the Morgan compound at 32 East 36th Street in Manhattan.

While the Hamilton’s lived in Table Rock they experienced both happy and sad times. A joyous time in the house was the marriage of Helen Morgan Hamilton to Arthur Woods, the New York City Police Commissioner in 1916. 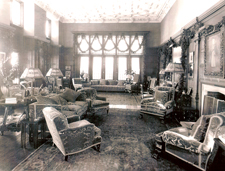 Within the immediate confines of the estate were eight houses and a chapel. Of the eight houses, the fifty-two room Table Rock House (presently, St. Mary’s Villa) is the largest. The English Gothic structure is four stories high and every room in Table Rock House, including the baths, had its own fireplace.

In Table Rock house were wine and coal cellars, offices for the family, and rooms on the fourth floor for the staff. The largest room measures approximately 83 by 22 feet. This was the “large gallery” once used as a formal sitting room. During the Academy days it was used as a gallery and stage area. Today, retreatants use it as a large meeting room for gatherings. At the east end of the room is large Norman-style fireplace which dominates the entire wall. The walls and floor are oak, while the ceiling is elaborately sculptured plaster. Of nearly equal length along the south side of the gallery is an enclosed porch. The enclosure is redwood with leaded glass windows. From this porch, as well as from all windows at the rear of the house, one had an unobstructed view of Sheppard Pond and the boathouse. Mrs. Hamilton’s original plans called for terraces all the way to the pond, however, only two were built and the natural slope of the hillside was left between the second terrace and the pond.

The water from Sheppard Pond was pumped up the hill and used to fill a goldfish pond stocked with large ornamental goldfish behind Table Rock House. Later a large swimming pool, since filled-in, was built there.

Perhaps the most beautiful room in the house was the drawing room which is now the chapel. This room is finished with fine oak paneling and a beautiful plaster ceiling. On the north wall is a white marble fireplace, above which once hung a nearly life-sized portrait of Juliet Hamilton.

Other rooms on the first floor are the kitchen, breakfast room, gun room, library, and offices. The first and second floors are not a complete story apart, but rather, a split level. The second floor contains only the entrance foyer and hall, and the dining room.

The east wing of the third floor was occupied by the master bedrooms and family rooms. The west wing of this floor contained an incredible fifteen guest rooms. Several of these guest rooms are connected by bathrooms. Among the first to occupy one of the guest rooms was Andrew Carnegie, the famous steel manufacturer, and later, a philanthropist. Corridors throughout the third floor were finished with hand-painted wallpaper and red carpet. During the time of the Academy, this floor was occupied by classrooms for the girls. Today they are private bedrooms with bath and a large meeting/gathering room.

Tragedy with Elizabeth, the Playhouses and Chapel 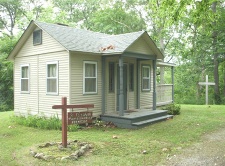 There was great sadness at Table Rock on January 9, 1919. Within a month of her tenth birthday, Elizabeth, the youngest daughter, died of the flu during the raging epidemic.

Until the time of her death, Elizabeth lived with her nanny, Alice McGeorge, in “The Playhouse.” Betty, as Elizabeth was called, disliked the large Table Rock House, and chose to live in the eight room Playhouse which was located on the hill on the east side of the stables. In addition, she had a one-room playhouse – still standing, to the left of the grotto. It is presently a hermitage used for quiet meditation.

Shortly after Betty’s death, her parents decided to build a chapel in her memory which would serve as the final resting place for the Hamilton family and also serve as a house of worship for the people of the valley. Thus was built St. Elizabeth’s Memorial Chapel in 1920.

In order to build the chapel, it was necessary to move Brook’s farmhouse. The farmhouse, now named “Chapelturn” was moved about 100 yards to the west. Construction of the chapel then began, just to the west of the gatehouse. In keeping with the design of the estate – English gothic, the chapel was designed to be similar in architecture to chapels that dot the English countryside. 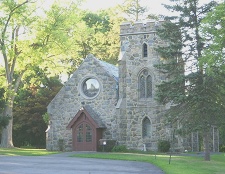 While the chapel was being constructed, the family also decided to move Betty’s eight room playhouse from its location on the knoll by the stables to its present location just south of the chapel. Nanny lived there until her death in 1943. Later it was the home for the caretaker for the chapel.

Other Buildings on the Estate 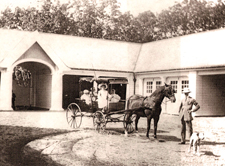 The gatehouse, which contains the cornerstone of the estate – Table Rock 1904 – is located on Eagle Valley Road, east of the chapel and within feet of the former Stirling Mountain Railroad tracks. This small stone house was the home of the gatekeeper. The drive from the gatehouse to Table Rock was one mile.

About half-way up Sisters Servants Lane, between the gatehouse and Table Rock, a narrow road goes east. On this road were two houses. The first is known as B.Q., i.e., bachelor’s quarters. This was the home of the chauffeurs. Presently, this is the provincialate house at 9 Emmanuel Drive.

Farther south on this road stood the previously-mentioned “Cotswold” house. Cotswold was built by Juliet Hamilton’s cousin and her husband – Rev. and Mrs. John FitzPatrick at the same time Table Rock House was being built. Rev. FitzPatrick was the rector of St. Mary’s Episcopal Church in Tuxedo Park. Cotswold was named after the hill country in England’s midlands which was a favorite vacationing place of the Hamilton’s. Cotswold was later the home of Mr. and Mrs. Alexander Hamilton until they moved to Cranberry Lake in 1965. At that time, Cotswold was sold to St. Mary’s Villa and it was occupied until fire tragically destroyed the quaint home in 1972.

The stables, which were later converted into the St. Joseph’s Adult Care Home, contained, along with the stalls, two houses; one for the grooms, and one for the head groom.

There is a house on the estate that is located south of the Table Rock house – near the New Jersey state line. (Actually six acres of the original estate are located in New Jersey). This six room dwelling has been used as a caretaker’s home and a home for our resident chaplain; it is now the novitiate house.

The Table Rock Estate came to an end in 1939 when, with the coming of the war, Mrs. William Hamilton could neither hire workers to be on the staff, nor purchase the coal necessary to maintain the large house. The asking price for the house and an eighty acre parcel was $650,000. After selling Table Rock House, Mrs. Hamilton lived in the Cotswold and Chapelturn houses, and also at One Sutton Place in Manhattan, until her death in 1952.